O.K. Event cards are now played on species for the listed amount of turns. Was wondering if we can also include an option where Event cards have the opportunity to affect 1, 2 or 4 species?

I.e. those with 2 card effects, you overlay on two adjacent species cards. Those with 4 have the option to overlay 4 cards if they're arranged as a 2x2 square.

This way, we can keep a few event cards that do happen to have larger effects.

O.K. just re-edited text on the event cards. Let me know what you think.

I dont think negative points would be a good idea to carry, since it's something that if not written down will be forgotten through the playtime. negative point should perhaps be applicable if the events are still in effect when the game ends and the scores are being tallied.

I think a better option would be for certain event cards to only function if you play them on one of your own species, much like sacrificing units in standard game terminology, or have other caveats that protect what you have but limit your play options. That would bring a layer of strategy to some more powerful event cards. For example, we could have an "Endangered Wildlife Preserve" event that can be played on any card of score value X or higher. However, it is removed from play should either player play a second copy of that species (which is representative of it being delisted as endangered and becoming fair game).

Not real happy with them hitting multiple species as I think this will be confusing for players that it is either or. As is, playing direct on one species is pretty clear how it works.

As to the negative numbers, No. We were concerned earlier that adding up the points was already hard enough. Negative numbers are going to add a whole 'nother layer of difficulty. My google fu is weak today, but in looking for lesson plans involving negative numbers, most of the lesson plans seem to be squarely putting that under algebra instruction... so around grade 7 or higher (age 12). That's a lot higher age than we've been aiming at.

I think only if the event would likly target other species it should, like an oil spill.

Something like this? You get to choose, because sometimes you don't want to effect certain cards in case they mess with your card connections. 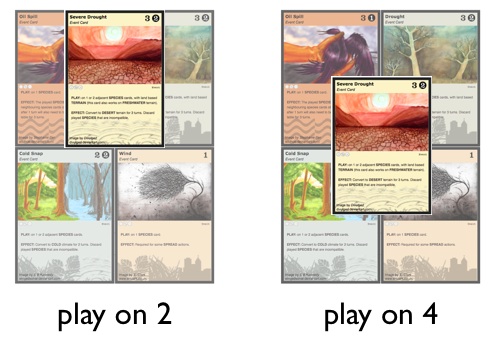 Note that we can make the vast majority of event cards, single only.

There are all sorts of ideas I had for Habitat cards which are simply too complicated for the basic game. Similarly, I think there are a lot of ideas here which could happily be explored later but are unnecessary for the 'core' game. While I'm not entirely happy with what the current events do (I'm holding back judgement until I get to play), the basic mechanic behind them seems sound and I see no point in stretching them at this stage.

O.K. game on! Will stick to the one card scenario.

I printed the versions that have "play on 1 or 2" for convention, so I'll see how it goes. Hopefully I shall actually get wee ones to play.

Similar topics
» Turning "Selected Cards" list into a pdf file? Printing cards at Kinkos or other print shop?
» Phylomon Cards
» Evolution Cards
» A4 cards and a new British Deck
» is there a possibility to add new effects to the animal cards?